On innovation from within, with Eric Yuan, Founder and CEO of Zoom. Recorded on Nov 1, 2017 in partnership with Harvard Club of SF and SignifAI. More info: hcsanfrancisco.clubs.harvard.edu/ and signifai.io/ 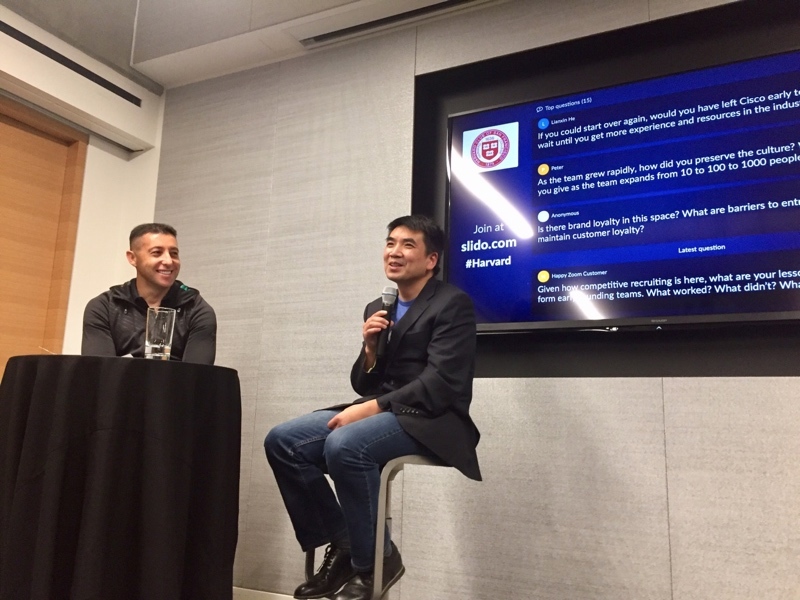 I was extremely fortunate to animate a fireside chat with Eric S. Yuan recently, in front of an audience of Harvard Business School and Harvard University Alumni, as part of the CEO series of the HBSANC and Harvard Club SF.  What a fantastic evening that was: Eric is really charismatic, fun and an incredible and original thought leader.  It was a very entertaining evening for everyone, packed with business learnings and life lessons.  The story behind Zoom is fascinating and I personally very much enjoyed conversing and hearing firsthand the advice from a great entrepreneur, who happens to also be a very humble person. In this post, I wanted to share just a few learnings from the 90mn discussion with Eric, illustrated by his actual answers. I hope that you will like my selection and will be encouraged to attend the next CEO series event.

Can large companies foster disruptive innovation to their own businesses from within?

Eric was instrumental in building WebEx into the $1B+ business it is already today.  Yet he started Zoom out of frustration for what he perceived were the frictions and inefficiencies of the WebEx model, as well as the fact that it left out a large segment of the population.  Zoom initially addressed the SMB space, where WebEx did not compete, but the company has now become very directly competitive in the Enterprise segment with a disruptive service that is more affordable and simpler to use than WebEx.  It is another example of The Innovator’s Dilemma phenomenon and I asked Eric whether he thinks that large companies can find a way to harness the innovation that comes from within, instead of seeing their business being disrupted from the outside.  Eric’s answer is very categorical, he thinks that it is very hard to innovate inside corporate cultures that are resistant to change.  The segment captures his full view on the topic, preceded by the story of how the idea for Zoom came about.

What makes a winning product in a very competitive market?  Eric is an engineer by trade who drove the product development for Zoom himself.  Zoom is the fastest growing business collaboration tool in the industry, beating in adoption speed not only other well-known video communication tools such as Skype and WebEx, but also the ever-so-popular Slack.  This next segment captures his product philosophy of extreme simplicity for the user, high quality, and reliability, which I am sure would have received Steve Jobs’ approval.

The technical aspect of this question is one of the dimensions where the Zoom team directly benefited from having built WebEx before.  The technical team planned for scalability from day one and they were rewarded with a reliable product that just works.  Eric also talks about process scalability as they continuously grow the team.

There are many alternative solutions, yet Zoom’s user base has skyrocketed to millions, and it could not have achieved such growth without an extremely high level of user retention and loyalty.  Eric credits this loyalty to the Company putting the best interest of his customers first:  their price, for instance, is stable despite a continuous progress of the product functionalities and features.  But first of all, the product is easy to use and works well, consistently, and ultimately (I think) that’s the main driver of customer loyalty.

Zoom put a billboard on the 101 early in their history, which was somewhat daring for them given their early stage at the time.  I asked a question about it, thinking that it would lead to his strategy for building the Zoom brand. Instead, it turned into a very candid description of Eric’s personal dreams at the beginning of his career in the Silicon Valley and how he came to achieve all of them.  It’s an inspiring segment.

Someone in the audience asked about the key factors that contributed to Zoom’s success.  Eric zeroed in on only one: the Company’s culture, which is not dissimilar to other leaders who participated in this forum before.  Company culture is the personality of a company. It defines the environment in which employees work. Company culture includes a variety of elements, including work environment, company mission, values, ethics, expectations, and goals.  Eric states simply that he believes that the Company should strive to make every employee happy every day.  In fact, Zoom’s core mission is simply Delivering Happiness, which also applies to its culture.  The Company seems to deliver on its goal, judging by its flawless ratings on Glassdoor.

On how Eric Yuan is following his own path (hint: must see)

Eric has already a wealth of business experience from his 14 years at WebEx and Cisco; on top of that he is a dedicated lifelong learner who reads constantly and yet, he truly is an original business thinker who follows his own path.  The section that follows makes that fact really apparent.  We played a little game where I would read a generally accepted business statement and ask Eric to comment.  What followed was often a hilarious yet really insightful reaction as to why he would (most often) disagree with conventional wisdom statements such as “hire fast, fire fast” or “grow as fast as possible once you reach product/market fit”.  This video segment is a little longer but is really worthwhile.  Highly recommended.

When is the right time to start a company?

A younger member in the audience asked how much experience was required before starting a company, which is his aspiration.  Despite having spent 14 years in total at Cisco and WebEx, Eric was very direct with his answer: as soon as you can.  It has to do with personal learning and development, as well as enjoying the speed and impact that one enjoys at a start-up.  Quote: “if you can, tomorrow, quit, start a company!”.

Continuous learning as a leader

During the talk, Eric touched upon the fact that, as a founder and CEO, he believes that it is possible to continuously grow as a leader to fit the evolving needs of the business, as long as you are committed to continuously learn and challenge yourself.  He cited the founders of Stripe, Dropbox, Box  and Facebook as examples of great leaders that were also very young yet led or are leading their companies to great heights. So how does he learn himself?  Listen to his personal method and his advice.

Last but not least, a funny anecdote

To finish on a light note, here is Eric talking about one of his lessons learned raising capital.

I am very grateful towards Eric for contributing his time and sharing his thoughts and advice to the Harvard community at large.  If you are interested in continuing to learn from him, I highly recommend that you check out his posts on Linked In or the videos of his interviews on Youtube, his thoughts are always very insightful. He is also on Twitter @ericsyuan and you can follow me there as well @SignifAICEO.

Or
If you have linked your account to one of the following social networks, please click on the relevant icon to log in
Not a member yet?
New Users