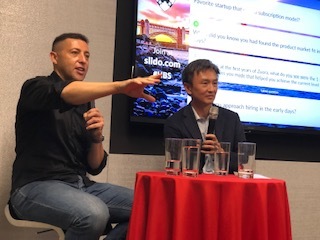 On October 23rd, the HBSANC CEO Series had the privilege to host Tien Tzuo, co-founder and CEO of Zuora.  Tien is one of the foremost thought leaders about SaaS and the subscription economy in the country.  He was very generous with his thoughts and experience drawn from an incredible career: he was part of the first dozen employees of Salesforce.com which he helped lead as part of the CEO’s executive team for close to a decade.  He then co-founded and became the CEO of Zuora in 2007 to help enterprises manage their subscription business models and he took the Company public in 2018.  It was a fantastic event packed with a lot of learning and attended by members of the HBSANC, the Harvard Club of San Francisco and the Wharton Alumni Club.  We followed our typical fireside chat format which strongly encourages direct questions and interactions between the audience and the speaker.  Attendees also received a copy of Tien’s recently published USA Today bestselling book Subscribed.

Below are some of my personal learnings from the evening with Tien.

The first group of employees of Salesforce.com set out to fundamentally change the software industry at the onset.

I wondered whether the first dozen employees of Salesforce.com had the ambition to transform the software industry from the beginning, or whether they gradually realized the impact they were having and articulated that vision later on.  Tien confirmed that the bold idea was there from the start, and that’s partly what attracted the early employees to the then start-up.  Obviously, there was a lot of uncertainty regarding their chances of success then as millions of people in software were operating completely differently, so it took time and great execution to transition from packaged software to SaaS, but it is truly remarkable that in this case, Marc Benioff and his team had such an ambitious idea right at inception.

Later in the evening, Tien drew a parallel to his own founding experience.  Being at the forefront of the SaaS revolution, he was able to think about and consider, before a lot of people did, a very large number of products and verticals that were going to be transformed by the subscription business model.  He set out to start Zuora based on a similarly big idea, a vision with “a lot of runway” that could enable him to build a multi-billion company over the long-term.  In order to do that, he needed a “broad play” which was the idea of enabling the billing and payment part of the value chain for every type of business adopting a subscription model.  He picked well, given the trajectory that Zuora has had since founding and how it is positioned to enable the subscription economy going forward.

The World is moving toward the subscription business model

Not just software, the World, in other words every economic endeavour will adopt a subscription business model.  Packaged products will be the exception 20 years from now, everything will be a service that will be driven by the satisfaction of specific customer needs, a deep knowledge of the customer’s usage and satisfaction, and those services will live and die based on how effective they will be at fulfilling those needs relative to the alternatives.  That’s Tien’s biggest message, which he conveyed in multiple ways.
First of all, he told us about his observations in the very early days of SaaS, when he started seeing non software companies adopt subscription business models around products that people traditionally owned, like cars for instance.  He was noticed Zipcar -- which was a precursor to Uber and Lyft -- had traction very early on, which proved that people were ready to transition from ownership to a service even for products that were previously seen as things they needed to own out of necessity or even as status symbols.
He then described the underlying theory and rationale for the trend, for instance the advent of enabling technologies like smart sensors embedded in hardware products. But more fundamentally, it happened because the customers benefits the most from companies making a constant effort to understand them, their needs and to deliver value maintaining a high level of satisfaction.  We heard numerous examples of non-software Zuora customers but I felt that how Tien brought the point home the most was when we played “subscription stump the chump” - a  game that consists of the audience coming up with product ideas that they think will not be a candidate for a subscription business models and challenging Tien to convince them of the opposite.  Evidently, Tien had some practice playing the game (“10 years”) since nobody could stump him, he graciously imagined or demonstrated how every business can be turned into a subscription business model, including hardware products like nuclear submarines.

Many questions from the audience centered around Tien’s experience as an entrepreneur and CEO.  I am listing a couple of insights I found interesting:
“I don’t believe that there is such a thing as product market fit, or that it marks a single point in time, you are always trying to find product market fit”.  “It’s not the job of the Founder and CEO to find product market fit, the organization should be constantly assessing that relative to the needs of every single customer, for the life of the Company”.  His statement is meant to counter the widespread view that finding product-market-fit is one milestone at the beginning that precedes scaling, etc.  He is aligning himself, without explicitly calling it such, with the principles of the learning organization.
“There is a relevant baseball analogy to hiring in the early days, that of the at-bat percentage, there is only a certain percentage of the time that you will get it right no matter how hard you try, you just need to look at your results, learn from it and adapt”.  “I’d like to go back and make sure I get it 100% right for the first 50 people, but I can’t, there is the fact that you can only attract certain people at the beginning, because of the risk or other factors, and vice versa later on when the needs of the organization change, so you do what you can.” Very pragmatic view, again pointing to an adaptive and learning philosophy.

Having the privilege of listening to and conversing with a leader like Tien Tzuo in a small setting is a very special opportunity. We are grateful to him for being so generous with his time and insights, and for the grace and humor with which he handled the questions from the audience.

We hope that you will join us at the next CEO Series on March 18th 2020, another special evening with Ed Catmull, Founder and retired CEO of Pixar, and author of NY Times Bestseller Creativity Inc.  You can register for the event here.

Or
If you have linked your account to one of the following social networks, please click on the relevant icon to log in
Not a member yet?
New Users